Chef Richard Erickson muses on the wonderful evening we were the hosts for this White House wine tasting. And enjoy the fabulous menu our chefs created to accompany each of the wines. 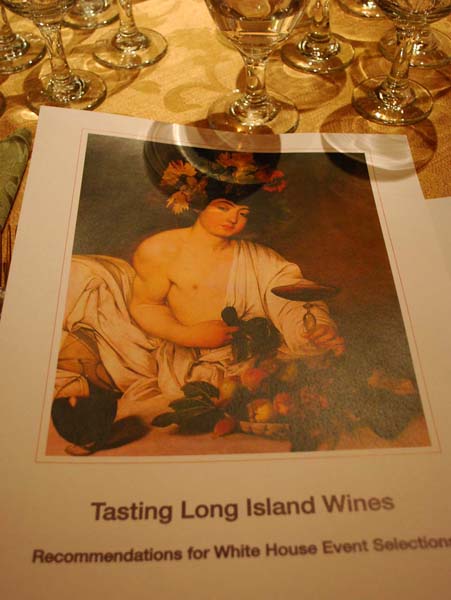 We were honored to co-host a Long Island wine tasting last night with friend and client, Eric Weiss, who works with national and international hotel groups as well as The White House on service, food and wine issues. That 's right, that White House, the one on Pennsylvania Avenue! In response to social conversation with Daniel Shanks, the Food and Beverage Director and Wine Steward at the White House, he realized the time was right to familiarize himself with the current vintages of various Long Island wineries. With scarcely 24 hours notice we put together a menu to accompany 16 different wines and eight people whose job it was to rate the wines. Yes, I know, a tough job but someone's got to do it!

Eric has a wine and hospitality resume longer than my arm. He kept us on task in a fun, friendly way, always mindful of the job at hand. We described each wine with three words, ie. "black currant, white pepper, soft", judged whether or not it was representative of the grape variety, and finally, whether or not we liked it.

Apparently these State dinners run like clockwork, 1 hour to an hour and 15 minutes max. No waiting for the bouquet to open, everything must be right there, up front, immediately accessible. So what did we serve? Here 's the menu:

Years ago at our restaurant Blue Mountain Bistro we loved hosting wine dinners, but in our current incarnation as a take out business this doesn 't happen very often, You can imagine how fun it was to come up with a menu like this. Also challenging, as we didn't want the food to overpower the wines or have flavors that would conflict.

Everyone agreed the evening was a smashing success, and what fun to hear the variety of comments about the wines.It 's amazing how your impression of a wine can change from that first sip to the experience of savoring it with food. Many of my first impressions changed 180 degrees!

Chef Jonathan Sheridan executed a perfect progression of plates, Michael Clark from our catering staff kept the wines poured and provided excellent service, and when it was all over it felt like we did this every day instead of once in a blue moon. I'm sure some of these dishes will find new homes in our food cases and on our catering menus. Oh, by the way, if you haven't had wine from Long Island lately do yourself a favor. I was particularly impressed with the red wines which were a total surprise to me. Cheers!