Back to the Future - Bringing Back the Vintage Sign

Artist/owner of Bistro-to-Go Mary Anne Erickson has designed the store and cafe's new sign as a tribute to all her favorite vintage neons signs from the past. This beacon of Feel Good Food shines 24/7 welcoming travelers and locals to their eatery for delicious, nourishing food to eat-in or take-out. 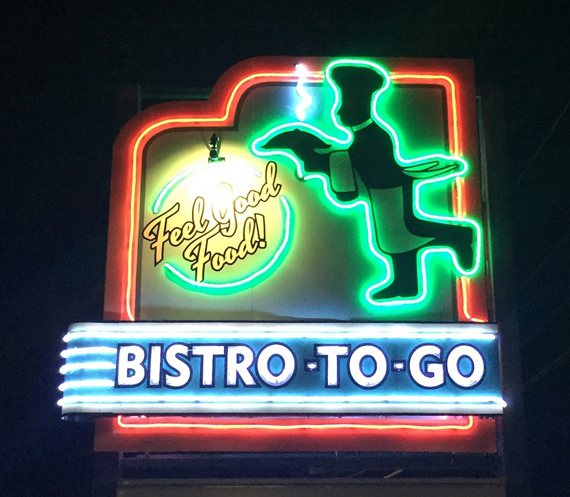 Who doesn’t love those great old kitschy neon signs that used to grace Main Streets all across America? Everyone, right? Well at least those of us who are baby boomers or beyond will remember what it was like driving almost anywhere at night and being basked in that colored neon glow.

My love for the beauty and classic design of vintage signs goes back to my childhood memories of family road trips. Any kid that grew up in the 1950’s would remember the thrill of setting out to explore our National Parks, seaside, lake or mountain resorts - in short - whatever your parents could pull off for a family vacation. Who knew that the kooky roadside attractions and family-owned diners would eventually become relics of the past? When you’re a kid, you just think everything’s going to be that way forever!

It wasn’t until I was going to art school in Los Angeles that I began taking serious notice of the fun and fanciful neon signs and buildings. Many of these treasures were beginning to look run down and some were even being torn down, in the name of “urban renewal” and modernization. That’s when I started snapping photos of interesting signs using a succession of cameras that changed over time. I still have some of my earliest snapshots of signs from Washington, my home state taken with my old Brownie camera! I eventually graduated to a “real” Nikon with interchangeable lenses, learned how to develop my own film, and print black and white photographs.

My passion for documenting vanishing roadside America had begun! In the 1980’s as a graphic artist in New York City, I bartered artwork with People Express Airlines for plane tickets to Florida. What a great opportunity to photograph many of the mid-century motels and signs that could still be found there. That’s when I decided to start painting these icons, initially with a series of watercolors and later oils on canvas. I now photograph and paint those postcard-like signs and scenes from a sense of urgency as bits of our shared cultural history are being lost every day.

In 2007, my chef/husband Richard Erickson and I opened our own roadside attraction Bistro-to-Go, a delicious eatery on Route 28 in Kingston, New York. Since then we have had a great run serving the Hudson Valley community, but our original road sign was beginning to look pretty shabby. Enter the very talented Kurt Boyer, who had designed many signs for us in the past. Kurt looked at me and said, “Mary Anne, you should design your own sign and make it a tribute to all the vintage signs you love to paint”! OMG! Why hadn’t I ever thought of that? I worked on some ideas, and months passed. I worked on a few more ideas and more months passed. Finally last spring I settled on THE one and said “Let’s do it”! Kurt agreed. We decided to use LED lights in place of neon, which would not only be more affordable to make, but also much less expensive to operate.

Kurt worked for months and months and finally the joyous day came in late November when he installed the new sign! I was nervous, was it really going to work? I’ll never forget the thrill of seeing it all lit up for the first time! Spectacular! The response from our customers and all who pass by has been overwhelming! People have literally come up to me and hugged me, thanking me for creating it! I never dreamed this homage to vintage signs would bring people so much joy! So who knows, maybe I’ll be starting a new trend: instead of these distinctive signs disappearing, perhaps we can help them make a comeback!! I certainly hope so!

To see all of my work, visit www.maryanneerickson.com. To view a current exhibit of my work visit Caldwell Banker Village Green Realty in the heart of Rhinebeck, New York.